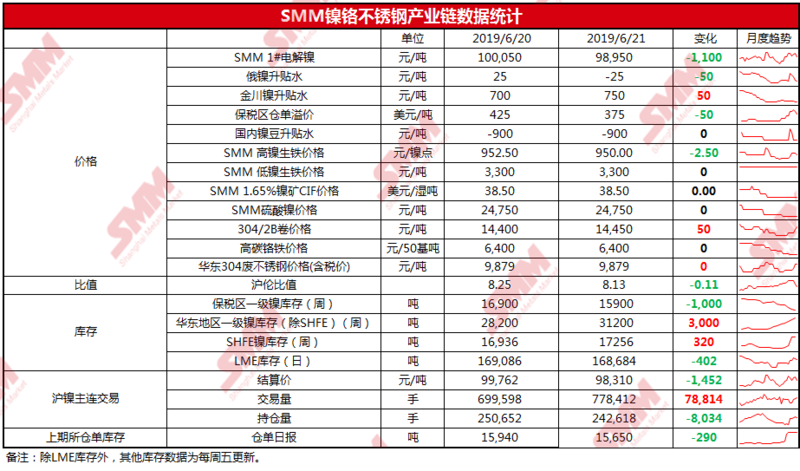 Macro: as of June 23, 594.2 billion yuan of local bonds have been issued since June. It has been disclosed that the planned issuance of local bonds next week is 305.4 billion yuan, and the final monthly issuance scale is expected to be close to 900 billion yuan, which is expected to reach a three-year high since July 2016. In the second half of last week, a number of securities companies announced that they had received a notice from the central bank to raise the short-term financing balance limit, which is expected to rise by a total of about 300 billion yuan after taking into account similar arrangements by other securities firms. The central bank continues to release liquidity, which is good news for financial markets. This week focuses on the G20 summit to be held in Osaka, Japan, from June 27 to 29.

Nickel spot market: last Friday morning Russia nickel than Wuxi 1907 level water. Some traders offer a discount of 50 yuan per ton, and some downstream are willing to hang orders. Jinchuan nickel than Wuxi 1907 contract generally reported 700 yuan / ton of water. Some of them are quoted at 800 yuan per ton. Russian nickel rising water continued to decline slightly, traders reported that the recent spot market supply gradually increased, import inflows and delivery after the end of some of the supply flow to the spot market, and Friday due to the sharp decline, most of the downstream cautious receipt of goods, individual downstream orders are lower. The spot market is very light. Jinchuan nickel rising water to maintain stability, according to traders feedback, although Jinchuan company actively shipment, but the supply of goods in Shanghai is not much, Jinchang headquarters is abundant. Jinchuan nickel ex-factory price of 98800 yuan / ton, down 1200 yuan / ton from Thursday, the mainstream transaction at 98400 to 99200 yuan / ton.

Nickel Sulfate Market: SMM June 21-according to SMM research, due to the effect of subsidies in the new energy vehicle industry in June, the demand front has led to a decline in the overall demand of the current industry, which is transmitted to the lack of interest in the purchase of nickel sulfate. At present, the buyer and seller make a tentative inquiry, the psychological price of the buyer is lower than that of the seller, and the price of nickel sulfate under the pattern of oversupply may face downward pressure.

Nickel price judgment: in the near future, the fundamentals are still basically stable, the recovery of pure nickel inventory makes nickel prices show the trend of high correction. Recently, we are mainly concerned about the impact of macro news on basic metals as a whole. Although the heads of state of China and the United States strengthen communication and there are many macro adjustment measures, the pressure of trade war is still shrouded in the market, and the outcome of the G20 summit is viewed cautiously.