The concentrated price rise of import manganese ore traders this week is difficult to support the situation of long-term losses this year. Instead, the downstream alloy market has soared, but the manganese mine has fallen against the trend. The mood of this week's jump high quotation market in the northern manganese mine market is extremely obvious. This week's mainstream manganese mine transaction price has been raised compared with last week, but the overall profit range is still negative, so the mine quotation still has a tentative price increase. Subject to the high level of port inventory, the bargaining power is still controlled by others. The miner is vague about the attitude of the downstream alloy market in the short term. I hope that SMM will make a relevant attitude towards the acceptance of the quoted price of imported manganese ore again. Therefore, we have made the following research according to the requirements of the market: 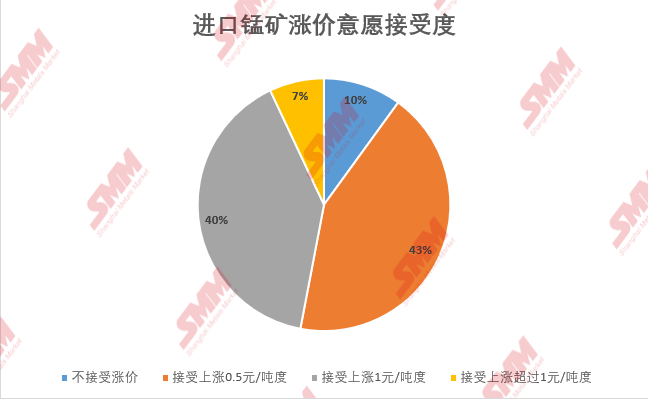 Alloy profits have mainly come from low-cost imported manganese oxide ore, so the alloy market in order to maintain their own interests of manganese ore prices are inevitable, but since June, alloy due to various factors, silicon and manganese prices continue to rise, the steel move to be launched next week is more rubbing hands, eager to try, the increase in steel prices and demand is looking forward to. In this context, the increase in alloy profit space is expected to reach a maximum of 200 yuan per ton, which brings the possibility of an inflection point in the price of manganese ore upstream. Even if the quotation of overseas mines to China is reduced in July, however, according to the current price, manganese miners are still in a state of loss. Before this week, the loss of mainstream manganese ore was about 3 yuan per ton, and the transaction price of each manganese mine increased by 1.9 yuan per ton on average this week. If the price of manganese ore continues to increase by 1 yuan / ton next week, the overall northern manganese mine market can return to the cost line and stop losing money, which is more conducive to the healthy and sustainable development of the industrial chain.

(SMM Shanghai Nonferrous Network Manganese Mine quotation has always been true and effective as the core, based on the actual transaction of the market as the criterion, to provide the market with sustained and reliable price reference and market analysis, in order to provide a reference, representative, fair and scientific price reference for the pricing of raw materials in the industry.)

China EMM Market to Remain in Supply Surplus in 2018, SMM Foresees
In 2017, China’s EMM price changed from highs to lows. In 2018, China’s EMM market will remain in supply surplus.

When EMM Market Will See Glimmers of Hope? SMM Reports
China’s EMM market has been sluggish since early May, and spot price has fallen from more than 13,000 yuan per tonne to 10,000 yuan per tonne. When will the sluggish market come to an end?