CST
translation
Source:SMM
SMM believes that the month-on-month increase in unforged aluminum and aluminum exports in May are mainly due to the following reasons.

According to the General Administration of Customs, China exported 536000 tons of unforged aluminum and aluminum materials in May, an increase of 7.63 percent over April and 10.52 percent over the same period last year. As can be seen from the figure below, although the international trade environment this year is more severe than in previous years, the export volume of unforged aluminum and aluminum materials remained high in May.

SMM believes that the increase in unforged aluminum and aluminum exports in May is mainly due to the following reasons. 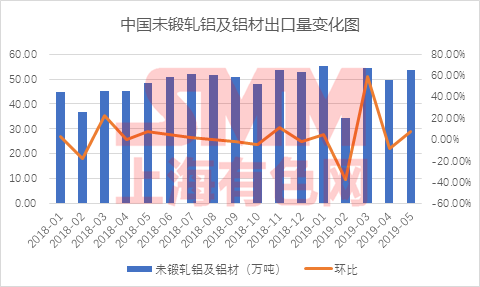 3) with regard to the exchange between SMM and domestic downstream manufacturers, it has been learned that although the Shanghai-to-London ratio has increased slightly recently, the deep processing cost of aluminum is actually still in a higher position because of the high labor costs abroad, while the domestic labor and site costs are relatively low. Aluminum processing fees are also falling under the fierce domestic competition, so China's aluminum exports to foreign countries still have a certain comparative advantage.

4) tariff effect, export front. The US announced an increase in the tariff rate on $200 billion of listed goods imported from China from 10 per cent to 25 per cent, which was subsequently extended by the Office of the US Trade Representative (USTR) until June 15. Although the United States has little impact on products such as aluminum profiles, but it still has a certain impact on aluminum materials such as 6, 7 series aluminum alloy plates and thick plates above 6.35mm thickness. Downstream manufacturers tend to lead exports in order to reduce tariff costs.