SMM6, July 7: the price of rare earths has fluctuated greatly recently, mainly because of the customs closure at the border between Tengchong and Myanmar on May 14, 2019, banning the import and export trade of all rare earth related commodities. The gate has been sealed and no declaration of rare earth related commodities is accepted, and rare earth mines cannot be exported to China from Myanmar. Subsequently, imports of ionic rare earth minerals from Myanmar were restricted, and there was no specific statement and time for the resumption of imports. The supply side was positive, while the prices of medium and heavy rare earths, mainly dysprosium oxide and terbium oxide, continued to rise.

Specifically, since the end of 2018, a month after the import window of ionized rare earth minerals imported by the Burmese side was closed, the prices of dysprosium oxide, terbium oxide and other heavy rare earths have risen significantly. In particular, since the official closure of Myanmar's import gate in mid-May 2019, the price of medium and heavy rare earths has gone up further. At present, the price of dysprosium oxide has reached 198-2.02 million yuan / ton. The rise in the price of medium and heavy rare earths is mainly due to a shortage of raw materials. On the other hand, the price of light rare earth praseodymium and neodymium oxide was once in a downward trend. At the end of April, it fell to near the cost line of 260000 yuan per ton. Some small major light rare earth smelting and separation plants were unable to afford to suspend production because the price was too low. Subsequently, before and after the May Day holiday, due to the replenishment procurement of metal enterprises and General Secretary Xi Jinping's visit to Jiangxi Jinli permanent Magnet Technology Co., Ltd., the permanent magnet industry received hot attention to push up the raw material price trend of praseodymium neodymium and neodymium oxide. At present, the price of praseodymium and neodymium oxide has reached 34.5-355000 yuan / ton.

The article said that the price of the website is not the transaction price of the mainstream big factory, but the price of individual small factory and trader. Because the quotation of this platform is lower than that of other platforms for a long time, foreign businessmen are more inclined to use the price of this platform as the standard of procurement pricing. But this kind of below the market unfair, not objective price causes many Chinese rare earth export enterprises to suffer the loss. The quotation of the website not only can not objectively reflect the real price of the rare earth market, but also does not want to listen to the suggestions given by people in the industry, which has caused certain economic losses to the rare earth export trade of Chinese enterprises, which has made people in the rare earth circles very disappointed.

For details of the article, please see the screenshot below: 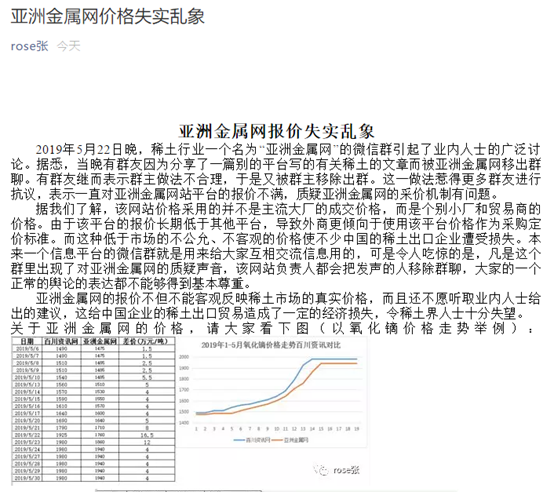 SMM, who heard the news, was saddened by the industry. As an independent third-party quotation organization, SMM has always adhered to its original intention and is subject to the supervision of the majority of customer groups. To achieve fair, open and fair to provide the industry with the most true market quotations, so that the healthy and healthy operation of the industry, and protect the interests of domestic enterprises.

The quotation of rare earth products of Shanghai Nonferrous Network is based on the quotations of mainstream smelters and traders, and is priced after comprehensive consideration of the actual inquiry and transaction situation, which is in line with the actual situation of the market. Reject pricing that deviates from the true state of the market.

For information on rare earth prices and prices, please contact: