SMM News: what does the Fed think of the economy, global risk and inflation? What do these lessons mean for the Fed's monetary policy and even the gold market? Let's take a look at the minutes of the Fed's last meeting for clues.

The minutes of the May meeting of the Federal Open Market Committee show that the Fed remains patient. Downside risks to the global economy have declined and the financial environment has improved. As a result, the Fed decided to be patient with monetary policy:

In view of the development of the global economic and financial situation and the weakening of inflationary pressures, it was generally agreed that patience with future adjustments to the target range of the federal funds rate remained appropriate. Participants noted that even if the global economic and financial situation continued to improve, a patient approach might still be necessary, especially in the context of continued moderate economic growth and weakening inflationary pressures.

Perhaps this is why the gold market has reacted so little to the minutes, as shown in the table below. After all, they do not contain any major accidents. The fact that the Fed is in no hurry to adjust monetary policy has long been widely expected and has been reflected in gold prices.

But does this mean that the minutes are irrelevant? Not exactly! We learned a lot of interesting things from the point of view of FOMC members. First, policymakers are more optimistic about the balance of global economic risks. While they agreed that downside risks to the growth outlook remained, some participants "believed that the downside risk of real GDP growth had declined, in part because the outlook for a sharp slowdown in global economic growth had weakened. Especially in China and Europe.

In addition, some participants noted that "following the pressure in the fourth quarter of last year, financial market conditions improved and price and financial volatility abated. "importantly, many participants believed that the improvement in the financial situation supported economic growth and employment prospects. The more optimistic outlook should translate into a stronger Fed monetary policy in the future-and put downward pressure on gold prices. However, there is a need to be vigilant that a new round of trade differences could prevent the Fed from abandoning its patience.

Second, members of the FOMC committee agree that the recent drop in inflation may be temporary. As long as inflation remains near or below its 2 per cent target, the Fed sees no reason to change the federal funds rate in one way or another. However, if the weakening of inflationary pressures is only temporary, it could reappear in the future. The Fed will then need to tighten its monetary policy position:

Many participants believe that the recent decline in PCE inflation may be temporary. Participants generally expected that the policy adjustment might be in line with the continued expansion of economic activity, strong labour market conditions and the inflation target close to the Commission's target of 2 per cent.

However, a small number of participants pointed out that if the economy develops as expected, the Monetary Policy Committee may need to strengthen its monetary policy position in order to maintain economic growth and maintain inflation at a level in line with the objectives of the Committee. Or the Committee needs to pay attention to the possibility that inflationary pressures may increase rapidly in an environment of tight use of resources.

This is really important. The Fed believes that the recent weakness in inflation has been caused by unique (special) factors, such as the unusually sharp fall in the price of clothing and portfolio management services:

At least part of the recent inflation can be attributed to soft traits, which seem to affect inflation only briefly.) Some studies have shown that the particular factors that have largely affected the acylation sector in the economy have accounted for a large part of the inflation fluctuations of the past few years.

In fact, the average measure of the PCE price index has been stable at or close to 2 per cent in recent months, as shown in the figure below. 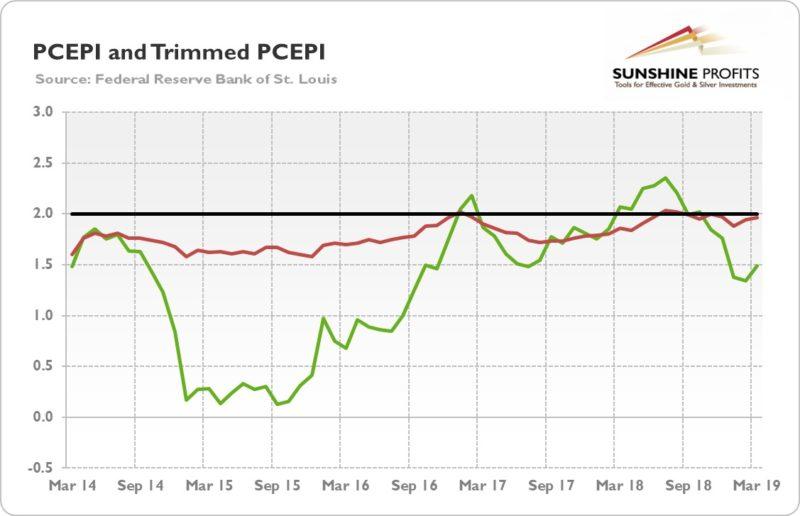 If this is true, we should see a rebound in inflation in the future. This means that the Fed may become more assertive in the future, or at least cut interest rates less likely than markets had expected. This is not good news for gold bulls!