SMM News: Weilai car initially appeared as the son of Heaven, from the blessing of JD.com, Tencent and other IT giants and star-level VC team, to the parking of Changan Street, to the frequent occurrence of spontaneous combustion, to the stock price dive, to frequent layoffs. Spread on the Internet, "self-directed and self-performed 10,000 cars delivered." The company reported 2018 results on march 5, with revenue of 4.95 billion yuan and a net loss of 9.64 billion yuan, an increase of 92% over 2017 and a loss of more than $10 billion in three years, with an average loss of more than 800000 yuan per car sold. If IT wants to prove that "money and Internet thinking can do everything," I think at least the automotive sector is an exception at the moment. How far can Wei Lai go than Letv, who was suffocated by his dream of making a car by PPT? Is there a future for the Weilai car? Will the share price of Weilai car still fall?

The company's marketing strategy is to promote its commitment to integrating the concept of "Internet service" into the car, but there is not much emphasis on reliability in the traditional industry. Since its birth, the car has gone through more than a century of development. For the cars used by Volkswagen, what runs through its historical development is the reliability and safety in the higher pursuit of performance. It is also doomed that the automobile industry is an industry that needs the accumulation of industrial technology. Wei Lai vigorously promoted the Munich Design Center in Germany, but did not specifically point out the differences. Munich is mainly responsible for appearance, interior decoration and human-computer interaction, while engineering development and implementation are in Shanghai. This is very misleading. If consumers do not study it carefully, they will think that the German side is responsible for automotive mechanical engineering.

Also, the company has historically focused on its "community services", "traffic thinking" and "Wei Lai Ecology" rather than the reliability and safety of its cars, and has never explicitly disclosed its crash test scores. A few days ago, there was an accident in which ES8 collided with a lamppost in Guangzhou. The front of the car was seriously damaged, but the airbag in the car did not pop up. As we all know, the ES8 is a seven-seater SUV, that focuses on the home market. If the safety of a family-oriented car is so questionable, it can be expected that in the past, the "Internet car" gimmick, Its target consumers will choose the product more carefully because the target customers of family cars will put safety first and their sales will be affected. In fact, perhaps market performance can explain something. In January and February 2019, Uli delivered only 1805 and 811 Weilai ES8, first quarter sales expectations to 3500-3800 vehicles. This is down more than 50 per cent from 7980 in the fourth quarter of 2018. In the last two months of 2018, ES8's capacity climbed to more than 3000 vehicles. The volume of delivery is lower than the capacity, which means that there may not be too many ES8 orders.

The company spends a lot of money on marketing, but it is called into question whether the investment can be translated into revenue. The annual NIO Day design costs tens of millions of yuan, inviting car owners to fly, stay in five-star hotels, listen to Imagine Dragons concerts, and set up NIO House in the most expensive locations. And the NIO House is a salute to Apple. Their stores are shown here: 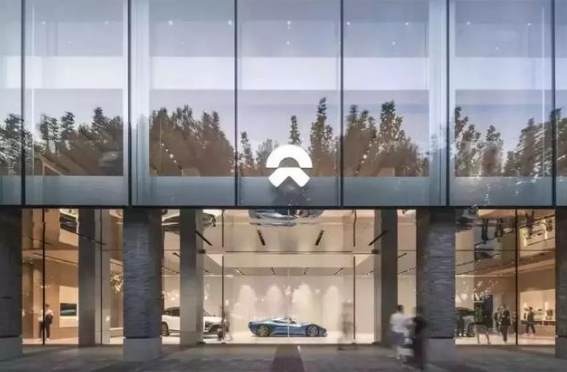 The well-known independent car reviewer, 38 American performance Control, also commented in a 16000-word article entitled "take you through the real Weilai ES8": "the Weilai ES8 is not a finished product. Or the few cars on the market that can be defined as unfinished. "

At the same time, some media quoted public data as saying that the investment of Weilai cars in Taiguhui stores reached about 80 million yuan, and the annual rent of Beijing Oriental Square is also expected to be about 80 million yuan, calculated. The annual rent in central Shanghai will be at least hundreds of millions of yuan. However, the Weilai car side did not comment on these figures.

The future of Weilai's share price is likely to be even lower than it is now. No wonder Li Bin said, "We don't want to talk about numbers. It's easy to humiliate ourselves when we talk about numbers." But if we don't talk about numbers, how long can we tell stories? Zhu Jiang, vice president of user development, said, "if you want to get to know Wei Lai deeply, you don't have to pay attention to the car." Perhaps the falling share price reflects the simple fact that the failure is not enough "the Internet", but not enough cars.