SMM News: on the afternoon of May 20, the China Petroleum consumption Total consumption Control and Policy Research Project (referred to as the Oil Control Research Project) released in Beijing a report entitled "study on the withdrawal schedule of Chinese traditional fuel vehicles" written by the Center for Energy and Transportation Innovation (iCET).

On the basis of in-depth study of the ban on the sale of traditional fuel vehicles at home and abroad, the development trend of new energy vehicle technology, the role of market economy, the safety of oil supply, environmental protection and carbon emission reduction, and other driving forces, In this paper, the design scheme of substitution and withdrawal of Chinese traditional fuel vehicles is put forward, and its uncertainty and risk are analyzed. Experts from China Automotive Technology Research Center, China International Engineering Consulting Co., Ltd., (NRDC) and other units commented on the report.

According to the report, the gradual withdrawal of traditional fuel vehicles is an irreversible global trend.

Driven by factors such as energy saving and emission reduction, pollution control and the transformation of the automobile industry, a number of countries, regions and cities have announced that they will ban the sale of fuel vehicles one after another since 2016. Although the ban on the sale of fuel vehicles in most countries and regions is still based on the statement of the competent authorities, Norway, the Netherlands, the United Kingdom and other countries have proposed a specific timetable for the ban on the sale of fuel vehicles through bills, national planning documents or transport sector strategy documents. Some automobile enterprises have also put forward the corresponding development strategy in view of this trend, for example, Volkswagen plans to realize the electrification of all models by 2030, and the sale of traditional fuel vehicles will be completely stopped. BAIC has proposed that its own brand will stop selling fuel vehicles in China in 2025. 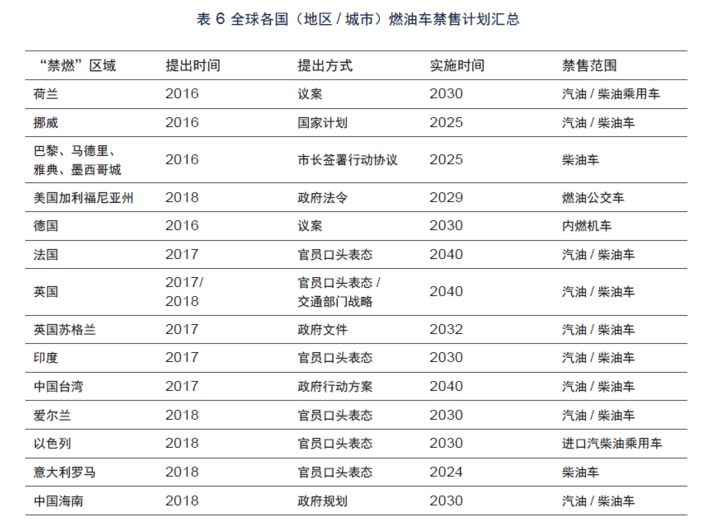 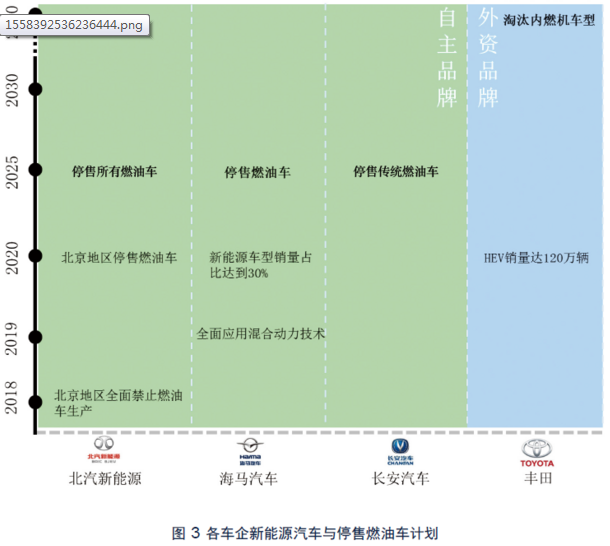 According to the report, the establishment of a timetable for banning the sale of fuel vehicles is to give full play to the guiding role of policies and enterprise production planning, and to give the society a clear market signal, that is, the gradual replacement and withdrawal of traditional fuel vehicles is an irreversible global trend.

Based on the experience at home and abroad, the relevant policies formulated by the government will play a key guiding role, investors need to make informed decisions, enterprises need to make production arrangements in advance, and consumers need to change their consumption cognition and mode. Some cities and regions in China have taken the lead in launching this process. In March 2019, Hainan Province issued the Clean Energy vehicle Development Plan, which became the first area in the country to put forward the clean energy goal and road map of vehicles in all sub-areas. Many auto companies have also taken the initiative to launch a timetable and road map for the withdrawal of their own brand fuel vehicles.

According to the report, the first driving force for China to develop new energy vehicles and gradually withdraw from traditional fuel vehicles is to strengthen the prevention and control of air pollution and improve air quality.

The State's "three-year Action Plan to win the Blue Sky Defense War" has called on all localities to introduce regulations on the prevention and control of air pollution and their action plans. Among them, the development of new energy vehicles is an important means of road traffic pollution prevention and control. Another important driving force is to reduce oil consumption and ensure the security of the country's energy supply. In 2018, PetroChina's external dependence has reached 70.9%, and the trend continues to rise. By the end of 2018, China's automobile production and sales had ranked first in the world for 10 consecutive years, with more than 200 million cars, and the oil consumption of passenger vehicles and commercial vehicles accounted for 42% of China's total oil consumption. Car ownership in China is expected to grow further. If you rely on traditional fuel vehicles to meet this demand, oil consumption will increase significantly, increasing the risk of energy supply. The scenario analysis of the oil control research project points out that China's total oil consumption reached its peak around 2025. In order to achieve this goal, the gradual withdrawal of traditional fuel vehicles is one of the most important strategic deployment.

When and how to quit?

The report recommends that the ban and withdrawal of traditional fuel vehicles can be implemented step by step in accordance with the steps of "region, model and stage".

Based on the economic development of different regions, the per capita retention of cars, the development of new energy vehicle industry, the construction of charging infrastructure and other factors, the report divides the region of mainland China into four levels. Level I is very large cities (such as Beijing, Shanghai and Shenzhen, etc.) and functional demonstration areas (such as Hainan, Xiongan, etc.); The second level is the traditional automobile traffic restriction city and the key regional provincial capital city in the blue sky defense war, etc. Level III is mainly the key areas of the Blue Sky Defense War and new energy vehicle industry clusters (such as North China, Yangtze River Delta, Pan-Pearl River Delta and Fen-Wei Plain), followed by level IV (such as Northwest, Northeast, Southwest). The exit process of traditional fuel vehicle is advanced by point and surface.

According to the difficulty of exit, the report divides fuel vehicles into five categories and ranks them in order of priority.

Buses, taxis, timeshare rentals and Internet hailing, postal and light logistics vehicles, airport port vehicles, sanitation vehicles, business vehicles and other models should be replaced or withdrawn, followed by private cars and ordinary commercial vehicles. In cities such as Beijing, Shanghai and Shenzhen in level I and Guangzhou, Tianjin and Nanjing in level II, private cars should be withdrawn completely by 2030. For example, Shenzhen has become the first city in the world to realize the full electrification of buses and taxis. On the road to the withdrawal of traditional fuel vehicles, Shenzhen has been in the forefront of China. The report recommends that light, medium and heavy trucks in road transport should set an exit schedule according to the difficulty of the development and application of their electric technology. Driven by a combination of market and policy tools, China is expected to achieve a full exit of traditional fuel vehicles by 2050.

What impact will it have?

The report predicts that with the gradual withdrawal of traditional fuel vehicles in China, diesel consumption has now reached a peak level and entered a consumption platform, and gasoline consumption will peak around 2025. After that, gasoline and diesel consumption will continue to fall, falling 55 per cent and 80 per cent from their peaks by 2040 and 2050, respectively. Greenhouse gas emissions from fuel vehicle terminals in China are expected to peak in 2024, with terminal greenhouse gas emissions falling by 51 per cent in 2040 and 77 per cent in 2050.

At the end of the report, it is pointed out that taking into account uncertainties such as the supply of rare metal resources such as lithium, battery recycling and charging infrastructure construction, the transformation of traditional car companies, the external environment, and major technological breakthroughs, There is a great deal of uncertainty about the exit and progress of Chinese traditional fuel vehicles.

At the scene of the press conference, Yang Fuqiang, senior consultant of the Natural Resources Conservation Association and expert of the core group of oil control research projects, pointed out:

The study of the exit schedule of fuel vehicles cannot be "across the board". There should be solid and forward-looking research for policy makers' reference. Investors, producers and consumers will also need sufficient time to make strategic and planning adjustments.

At the same time, it is also necessary to consider the possibility of "breakthrough" in automobile technology and energy technology, new energy vehicle technology breakthrough and business model innovation will speed up the exit of traditional fuel vehicles. In addition, more optimized low-carbon transportation system planning and shared travel will also accelerate the withdrawal of traditional Chinese fuel vehicles.

In the next step, the oil control research project will continue to carry out comprehensive low-carbonation research in the transportation system in conjunction with more institutions, and will select specific typical cities and regions to carry out in-depth analysis of the fuel vehicle exit road map. As a result, the exit speed of traditional fuel vehicles in the region can be faster than the time limit set by the whole country. In the future, based on more in-depth research, the oil control research project will continue to improve the withdrawal schedule of traditional fuel vehicles.