Market face: yesterday, the US dollar index suffered a marked decline, mainly due to the fact that Federal Reserve Chairman Powell cut his forecast for US economic growth next year after raising interest rates yesterday. After meeting with Trump, the president of the US House of Representatives said that Trump would not sign the Senate spending bill, meaning that it would be difficult for the US government to implement measures. The US index fell back from its high yesterday to 96.147, its lowest level in nearly a month. Overnight outside the metal has received a certain boost, Lun Aluminum reached a maximum of $1935 / ton, but as the United States has just issued an official lifting of sanctions against Rusal, Lun Aluminum has risen but not much, and then fell back from its high performance; The performance of Shanghai aluminum in the inner market is slightly stronger than that in the outer market. Yesterday, the Shanghai aluminum main company 1902 contract jumped out of the S-shaped path in the morning and fell back slightly after the low position rose 13735 yuan / ton.

Macro: there were more domestic meetings yesterday, and the relevant news involved in the meeting affected the market nerve. first, the central economic work conference held by the Central Committee in the past 3 days, and second, the meeting of aluminum producers led by the China Nonferrous Metals Industry Association. At that time, Chinalco, Weiqiao and other large aluminum plants will jointly explore the future development direction of the market. In addition, the US side said a few days ago that China and the United States will hold talks in January next year. Gao Feng, a spokesman for the Ministry of Commerce and Commerce, said that there are indeed relevant plans. In addition, the central bank today launched 30 billion yuan 7 days, 20 billion yuan 14 days reverse repo operation, it is estimated that the central bank this week net investment of nearly 600 billion yuan, brush the latest 11-month one-week high.

Fundamentals: the aluminum plant is still in the trend of production reduction, and it is necessary to pay attention to whether the aluminum plant will speed up its pace after the meeting. In addition, according to statistics yesterday, the national electrolytic aluminum inventory was 15000 tons lower than last week, although the rate of decline in de-inventory has narrowed. But overall, the rate of supply tightening is still slightly faster than the rate of weakening consumption, although there is more than 2 million tons of new capacity this year, but the new aluminum ingots did not enter the market at the end of the year.

Summary: aluminum prices have been passive in the near future, obviously affected by the news, pay attention to the outflow of news related to the two meetings, the price rebound has a certain probability, the performance of phased adjustment.

Other: 1) the World Bank forecasts China's economic growth of 6.5% this year. 2) Sun Ruibiao, deputy director of the State Administration of Taxation, said in a speech at the forum that the current period of time focuses on deeply promoting tax reform around reducing the tax burden. Study the introduction of a new round of larger, substantially inclusive tax reduction measures. 3) Shandong Aluminum Enterprise: this week or stop 70 electrolytic cells, Affecting production capacity of nearly 45000 tons 4) Alcoa Quebec Becancour Aluminum Plant plans to shut down half of its operating capacity 5) Handan City issued a yellow early warning of heavy pollution weather and launched level III emergency response 6) according to Central Plains data, 2018 so far, The national real estate regulation and control policy has been issued more than 400 times, which is expected to be about 450 times in the whole year. It is found that the key policies are mainly related to shed reform, provident fund, loans, purchase restrictions and so on. 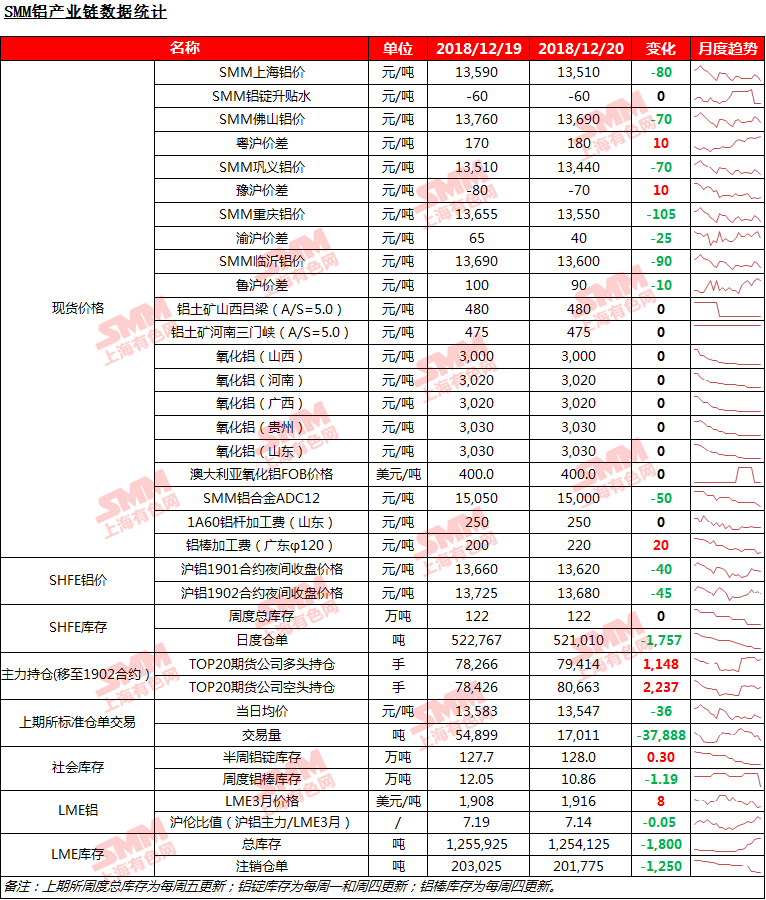