SMM September 5 news: today, Shanghai aluminum continued to release significantly, recording 6 consecutive yin. Looking back on the market, the Shanghai Aluminum 1811 contract has fallen for six days since it reached 15150 yuan / ton on August 29. The main contract in Shanghai closed at 14670 yuan / ton today, down 3.17 per cent from its high on August 29.

The performance of the American finger is strong and the collective floating green of non-ferrous metals is strong.

The change of US dollar index affects the nominal price of non-ferrous metals. In the international market, non-ferrous metals are usually denominated in US dollars, and the depreciation of US dollar promotes the rise of nominal prices of non-ferrous metals. The dollar has continued to strengthen recently, with the overnight dollar index hitting 95.73, the highest level since August 21, and has emerged from four consecutive days as of yesterday. The main reasons for the strength of the dollar are: 1. Emerging market currencies have collapsed and depreciated, such as the Argentine peso, the Turkish lira and many other currencies have hit record lows. 2. The US economy performed strongly, and all kinds of economic data far exceeded expectations, such as the US ISM manufacturing purchasing managers' index and the August consumer confidence index, which were higher than expected, giving the dollar momentum to rise. In March and September, the Federal Reserve basically raised interest rates, boosting the dollar.

At the same time, the United States said it could start imposing tariffs on $200 billion of Chinese goods on Thursday, amid growing concerns about trade disputes. Therefore, under the dual role of a strong dollar and tariff events, non-ferrous metals collective floating green.

The consumption is weak and the peak season is not strong.

In addition to the macro negative factors, the domestic consumer side is also weaker than expected. According to the SMM survey, since late August, orders in the domestic aluminum strip, building profiles, and air conditioning foil industries have declined significantly. In the last week of August, the output of aluminum ingots and bars in Guangdong fell to the level during the Spring Festival period. Although, for example, orders from rail crossing, automobile profiles, cables and double zero foil industries are on the rise, SMM expects the overall performance season to be weak in September and October because these products account for a relatively small share of electrolytic aluminum consumption, so their contribution is limited. For detailed start-up rate data, please refer to the SMM follow-up report.

The cost goes up slightly, and the aluminum price supports the lifesaver.

Alumina: alumina prices slightly upward, rising momentum and the previous phase is slightly inadequate, but the difference between internal and external prices is still large, alumina still has room to rise.

Pre-baked anode: according to SMM, the previous stalemate pricing in some carbon enterprises can not hold on to the beginning of the supply, and finally gradually accepted the price proposed by Weiqiao, that is, an increase of 220 yuan / ton, cash exchange of 3500 yuan / ton, acceptance of 3535 yuan / ton.

SMM view: this round of strong dollar + tariff concerns + weak consumption + online heating season production restrictions may be relaxed-prices fell back, but on the one hand, the cost side is still in the upward channel. SMM data show that at present, the complete average cost of electrolytic aluminum in China has reached about 15000 yuan per tonne. On the other hand, as of today, the spot price in East China has closed at around 20 yuan per ton for futures contracts for the current month. The spot price of aluminum ingots in South China rose to about 100 yuan / ton for futures contracts in the same month, and the spot market is still strong. In summary, SMM believes that if there is no sudden bearish event, the space below the aluminum price will be relatively limited. SMM believes that the Shanghai Aluminium 1811 contract is between 14500 and 14600, and then seeks new trading logic in the shock. 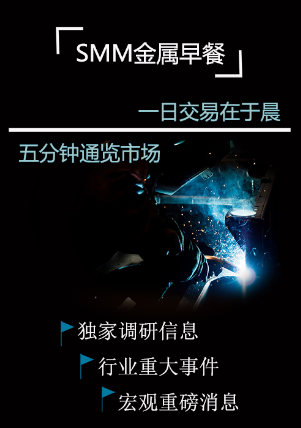 Silicon prices to rely on demand recovery
Demand would be the key thing to watch for silicon prices in the short term as prices have been dropping even before the dry season ends.

CST
industry news
MKS: China could double gold imports in 2-3 years
According to Frederic Panizzutti of MKS Precious Metals, Chinese annual gold consumption could double to over 2,000 tonnes within the next two to three years.