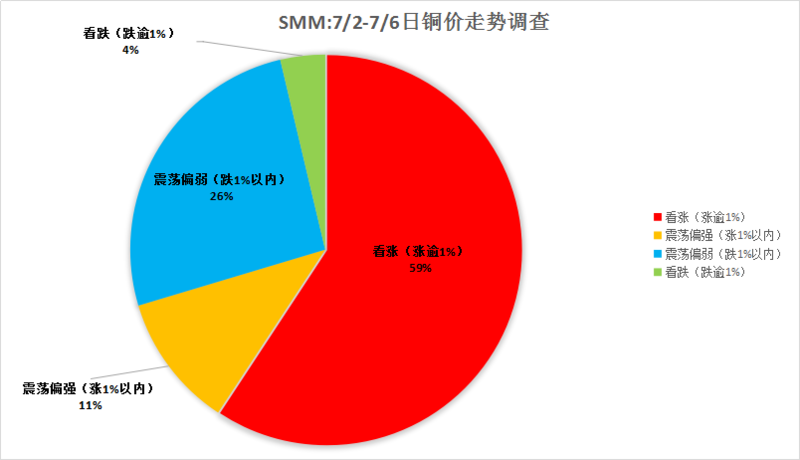 Guangzhou Futures: with the easing of macro risks, copper prices are expected to stabilize in the short term, but at present downstream demand is weak, the spot maintains a large discount structure, the rebound in futures prices is inhibited, the news at the end of the copper mine is calm, and copper prices lack a positive push. It is expected to maintain short-term interval volatility, Shanghai copper main fluctuation 51500 ≤ 52500 yuan / ton.

Futures Daily: on the fundamentals, the copper end does have a higher-than-expected increase, but the risk of strike will continue to ferment in the copper price rise cycle, refined copper production will be unstable in the later stage. Due to the dual restrictions of environmental protection and raw materials, the operation rate of new smelters and production capacity will decline. Scrap copper link, the first half of the foreign waste six types and crude copper anode plate inventory to alleviate the supply shortage. On the demand side, under the pressure of environmental protection, the overall is still in the doldrums. Copper prices are now solid at the bottom and need some bullish support to rise. Whether the good performance of mine negotiation news and downstream demand can continue in the third quarter is also an important factor affecting market sentiment. It is expected that in the second half of this year, the overall trend of copper will fluctuate at 6600 US dollars per ton, and the domestic copper price will operate within 50500 US dollars per ton.

In Europe and the United States, there are a lot of data next week, focusing on the final value of Markit manufacturing PMI in the United States in June, non-farm payrolls in June, and so on. If the US data continue to shine, the dollar index will remain strong, putting some pressure on commodity prices. In July, attention was paid to whether there was any new news about the negotiation of labor contracts in Chilean mines. On the disk, Lun copper fell nearly 9% in a row for three weeks, above the pressure in the 5-day moving average, KDJ indicators have shown convergence, it is expected that Lun copper ultra-low after the fall to stabilize, will run in the range of 6600 ≤ 6800 US dollars / ton.

Domestically, next week focus on China's official PMI data for June. According to SMM, orders from cable companies fell in June into the traditional off-season and are expected to continue to weaken in July. However, as copper prices pullback, the fine waste spread narrowed again, and the low is expected to stimulate some refined copper consumption. Disk view, Shanghai copper back to the May shock platform, significantly stronger than Lun copper resistance. It is expected that 51000 yuan / ton integer level support level will be tested next week, and Shanghai copper will run in the range of 50800 ≤ 52200 yuan / ton as a whole.

On the spot side, next week into July, beyond the end of the half-year settlement, and the central bank will start a targeted cut in requirements, the capital side will tend to ease. Inventories rose another 8574 tonnes to 255000 tonnes in the previous period this week, although supply-side pressure is not expected to be too high as the import earnings window has been closed recently. And next week gradually into the 1807 contract delivery cycle, the monthly spread in the line of 150 yuan / ton, gradually began to guide spot quotations, and based on the market's expectations for improved transactions, it is expected that the spot discount will begin to shrink next week. The spot quotation will be 120 yuan / ton at 120 yuan / ton.